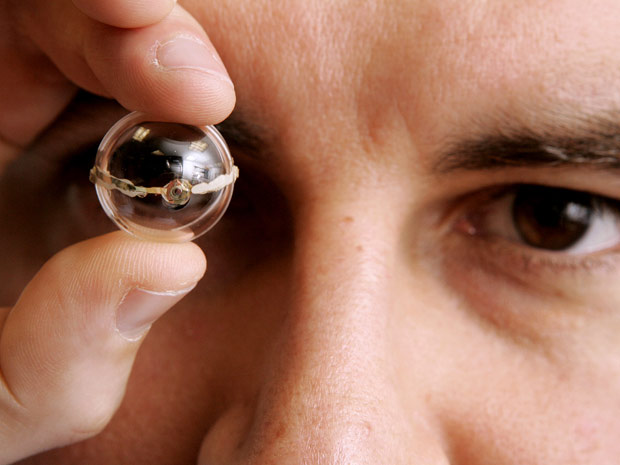 From the team that brought you the Bionic Ear:

For the contact lens to actually work, it would require an external energy source, making it impractical as a real-world device. …the real point …was to show that it’s possible to produce electronic devices into complex shapes using equally complex materials.

“This shows that we can use 3D printing to create complex electronics including semiconductors,” said Michael McAlpine, an assistant professor of mechanical and aerospace engineering… “We were able to 3D print an entire device, in this case an LED.”

The LED was made out of …quantum dots, nanocrystals that have been fashioned out of semiconductor materials and possess distinct optoelectronic properties, most notably fluorescence…

“We used the quantum dots… as an ink,” McAlpine said. “We were able to generate two different colors, orange and green.”

…the researchers built a hybrid 3D printer that is a combination of off-the-shelf parts and others a bit more exotic.

While the researchers concede that the 3D printing of electronics in this way is not applicable for a lot of electronics manufacturing… it may make sense for bespoke applications such as those needed for medical devices.

“Trying to print a cellphone is probably not the way to go,” McAlpine said. “It is customization that gives the power to 3D printing.”

In this case, the researchers scanned the lens and then fed the geometry into the printer so it that it could print an LED that conformed to the shape of the lens.

The challenge for the researchers was how to bring together different materials that may be mechanically, chemically or thermally incompatible.

…”it is not trivial to pattern a thin and uniform coating of nanoparticles and polymers without the involvement of conventional microfabrication techniques, yet the thickness and uniformity of the printed films are two of the critical parameters that determine the performance and yield of the printed active device,” said Yong Lin Kong, a researcher who worked on both the bionic ear and contact lens projects.

Microsoft took Samsung to court back in August, seeking to enforce a contract with Samsung over Android royalty payments. Samsung has been paying out per-device royalties to Microsoft for every…

Worry about invites no more: as of today, Dish’s Sling TV service is now available to all consumers in the United States. You can sign up for a week-long trial to decide if internet TV is worth the…

Sling TV now available in the US, and it’s adding AMC to the channel lineup

Bill Gates on The Verge: Can mobile banking revolutionize the lives of the poor?